A 27 year old woman presented to the clinic with 3 years of severe acid reflux and nausea. She had suffered ‘all of her life’ with the symptoms, but the previous 3 years were unbearable. She awakes nauseous and feels sick after all of her meals.

The symptoms worsened after being hit from behind by a wave in the ocean that bent her backward suddenly. At its worst she was completely incapacitated and unable to work, she also was anemic and suffered through heavy monthly cycles.  She was exhausted and tired ‘all day'. The impact on her marriage was challenging and while her husband was being very supportive, she longed to have more vitality for the relationship.

Endoscopy has been performed twice and showed that the valve of the lower esophagus that closes the stomach to protect the esophagus from acid was not working correctly. She was taking Prilosec, Zofran, Iron supplements, and Medical Marijuana, nothing was working.

It was discovered she had an intolerance to animal Milks and foods containing them, as well as Potatoes when eaten in combination with Grain. She would meet with our inhouse nutritionist to be educated on the naturopathic sciences of eating and food nutrition and also to answer questions related to her food intolerances.

She was prescribed nutrients to restore both her iron and sodium sulphate mineral deficiency, discovered with her initial workup. She was also prescribed a Chinese herbal formula that would improve nutrient absorption and helps to heal the lining of the gut, as well as restoring normal muscular motility waves in the digestive bed.

Nutrient concentrates were prescribed to improve liver and kidney function, along with glandular concentrates and Chinese herbs to support normal hormonal rhythms. As this natural treatment began, she was to continue her regular medications as well.

We started with a series of 10 Bio-Thermal Therapy® treatments. 2 treatments each week were designed to improve both digestive and esophageal valve function, normal motility, and to heal the lining of the digestive tract. Special attention was paid to improving bile flow from the liver, in order to reduce regurgitation of bile acids into the stomach. Acupuncture points that complimented the electrotherapy were administered as well to reduce inflammation and improve digestive enzyme secretion.

The spinal nerves of the kidney interdigitate with the spinal nerves of the stomach at the spine, and In some cases, a urinary tract infection will present with nausea for this reason. In this case, the trauma of hyperextension that immediately preceded the aggravation 3 years previous, was a clue to identifying a physical stress that contributed to the symptoms. That type of trauma can knock a kidney out of position and add to the nausea.

In order to treat this trauma, Naturopathic Manual Therapy was given once a week to reduce the hiatal hernia, as well restore her prolapsed kidney to the appropriate position. 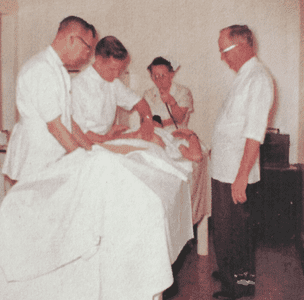 At her 6 week checkup after her first stage of treatment her nausea and reflux were mostly gone, with only some mild and occasional symptoms still presenting. She had stopped the Zofran and Medical Marijuana and was feeling more energized, even saying she ‘feels amazing for the first time in years’.

At this point we reduced the  Bio-Thermal Therapy® treatments to once weekly along with manual therapy to help with some continued low back pain and the likelihood that the hiatal hernia would need periodic correction.

Her hiatal reflexes and kidney reflexes were not present so she was holding those corrections. We were very happy about the improvement but there was still more work to do. Although her symptoms had improved, there was still evidence of inflammation, caused by bacterial overgrowth, we were determined to resolve.

We had relief of symptoms but correction of the digestive tract would take more time.  She was still on Omeprazole which can be very challenging to withdraw from, especially when it has been taken for many years as in this case.

She completed 12 more treatments over 12 weeks.

At this time we began to slowly wean her off of the Omeprazole. With the inflammation reduced and the symptoms abated, we could harness the improved quality of the blood to heal the tissues. During this time the patient completed another round of weekly treatments.

While the patient had significant “relief of life long standing symptoms” within a short 6 week period, at 6 months of treatment, after 46 Bio-Thermal Therapy® she was fully weaned off of her Omeprazole and asymptomatic. Her hair was growing in strongly, skin was glowing, digestion and energy doing great, with her anemia well resolved.

She then moved on to maintenance treatments and had a new lease on life. She started a new job in another part of the state and moved away remaining stable for 7 months, she had some mild aggravations but those were handled with a series of ‘tune-up’ treatments.

Martha has been working with our Nutritionist, Lindsay, with nutritional guidance and meal planning since October, and has expressed her joy with the program ...

These are general guidelines; the doctor will communicate with you specific instructions for your condition ...

Go (Coco)nuts Over This Recipe

Here at our clinic, we believe strongly that “food is medicine”. If you give your body the right fuel required, it can do its job of healing, growing and creating energy to keep you living your best life. For this reason ...

A 57 year young woman presented to the clinic 4 months after a breast cancer diagnosis of the left breast after a routine mammogram. After this diagnosis, a lumpectomy was performed to remove the tumor as well as remove her lymph nodes ...

A 73 year old woman came to the clinic having been recently diagnosed with rheumatoid arthritis (RA). The ankles, knees and hips were all affected. The patient had been in a flare about 3 months earlier...

A 60 year young female patient presented to the clinic with stage 4 breast cancer that she had been diagnosed with about 8 months previous. The tumor was estrogen positive, progesterone positive, and had a high proliferation rate...